PHOTOS
HARV (Randy L Harvey) says
I don't know anything about this picture but I thought it was cool so I wanted to share it. Somebody had a bad day. 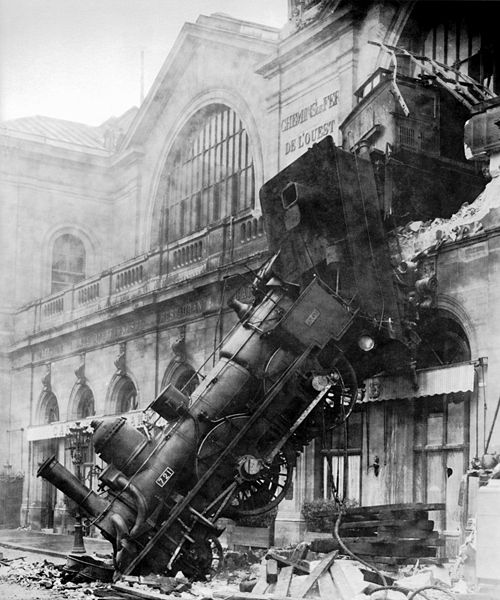 just what was needed to brighten a long day at work.

Did you know the picture is of the (in)famous Montparnasse derailment in Paris in 1895?

Thank you for sharing the link. I didn't know anything about the picture at all. I just saw it in with a bunch of other pictures with a theme of "having a bad day". Thought it was cool and wanted to share it with everyone.

Just a few minutes ago I was at the library reading a book about the wabash. It has a section about Derailments, Washouts, and 'Cornfield Meets' (a.k.a., head-on collisions). Some other pix of bad days!

WWW
justsendit (Mike Freeman) says
I seem to recall an old before/after sequence of a Shay Locomotive. The first was of the Shay parked on a wooden trestle with its Engineer and Fireman posing in front for the camera; the second was of the Shay at the bottom of the ravine amongst wooden timbers after the bridge failed under its weight! I can't recall if the crew survived or not.

Anybody seen that disaster floating around the inter-web?

PHOTOS
jimb (James Bongiovanni) says
I always wondered about that photo. It was on the cover of one of my textbooks for "Instrumentation & Theory of Experiments" back at Boston University in 1989.

"Socialism is a philosophy of failure, the creed of ignorance, and the gospel of envy, its inherent virtue is the equal sharing of misery." ---- Winston Churchill

PHOTOS
165thspc (Michael Koenig) says
Never will understand why so many train stations were built as dead-end rather than run through. I know, I know - takes up less real estate, cheaper!
Mike, the chassis guy!